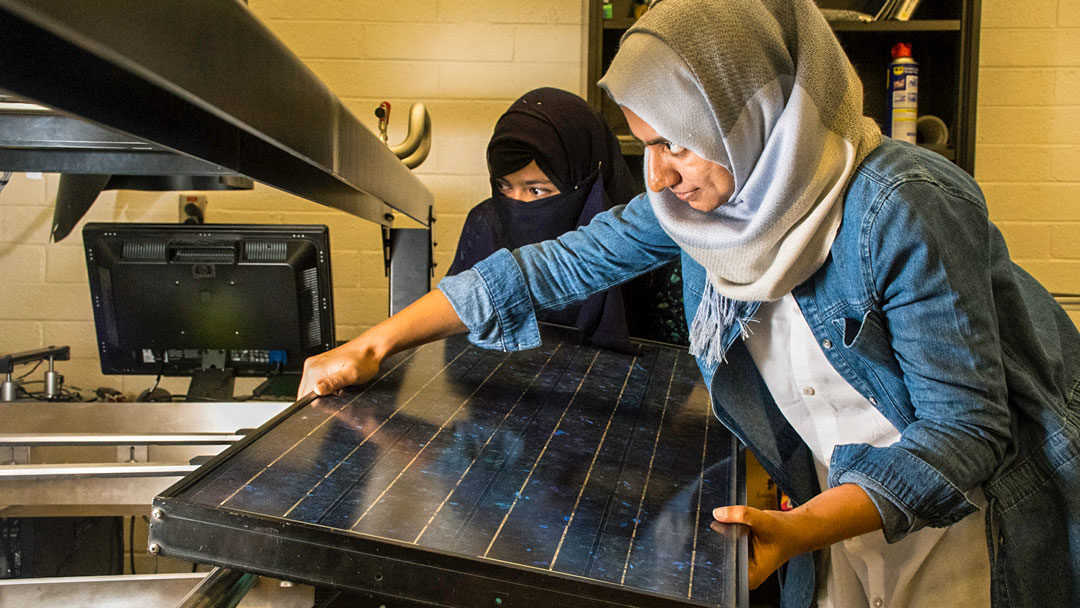 Some visitors leave the U.S. with a miniature Statue of Liberty or Grand Canyon photos. USPCAS-E scholars leave the country with transformational knowledge they’ll put to good use in their native Pakistan. 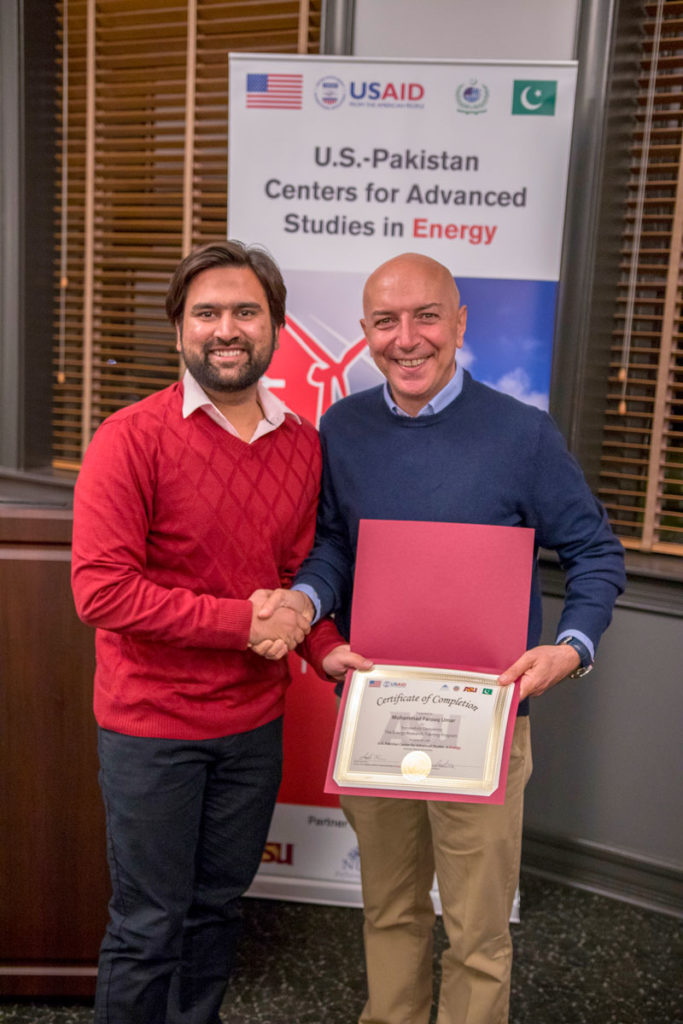 Two such scholars are Afshan Qamar and Farooq Umar. They’ve both earned master’s degrees from NUST and established impressive research credentials. Now they’re headed to doctorate-level study to further the expertise they will eventually apply to solving Pakistan’s energy crisis.

Both Qamar and Umar had degrees in electrical engineering when they were admitted to the USPCAS-E program, and both are firmly focused on developing renewable energy resources for their energy-strapped nation. Each clearly sees that the value of renewable energy extends beyond the electricity generated.

“I did my first job in electrical power stations,” says Umar. As an electrical maintenance engineer at a utility, he was dismayed by what he saw streaming from conventional, coal-fired power plants: pollution. Nearby, however, he saw solar plants.

“I got really inspired by seeing that clean power. That is why I made my decision and quit my job.”

Umar discovered the USPCAS-E program through a colleague from his undergraduate studies and applied.

“My friend was doing his master’s,” he says, “And his knowledge was very up-to-date. He had the latest technology to use with this program.”

Qamar had been focused on renewables from her undergraduate days. While she values clean energy, she also recognizes the economic benefit that renewables deliver.

“Right now, the sources we use to create electricity in Pakistan are mostly oil and coal and, of course, they are very expensive,” she says. “We’re spending a huge amount from our economy on resources we’re importing.”

Renewables, she knows, can help stop that flow of money out of the country and also create trickle-down benefit.

“When you invest in renewables, you’re not only creating electricity; you’re creating jobs. A lot of people are involved: designers, manufacturers and the people who are installing these systems,” she says.

Opening a door to opportunity

Participating in the USPCAS-E program put both Qamar and Umar at opportunity’s door. As hoped, Umar found himself working in a well-equipped lab with top-tier technology, and he credits his experiences at Arizona State University with giving him the foundation to do one of the projects he’s working on now: developing a smart solar inverter specifically designed to respond to the frequent load-shedding events Pakistanis endure. Load-shedding is when the electrical power supply is intentionally shut down to avoid excessive load. This disrupts power availability and everyday life. An inverter helps to keep certain devices running during load-shedding.

“It is very different from the inverters available in the local market,” he says. “The number one benefit is that it has more efficiency.”

That’s because some inverters currently made in Pakistan can have efficiency as low as 20 percent, while 80 percent is the upper rating. Umar is designing an inverter he expects to deliver 90 percent efficiency, and it also can be run on-grid or off. That means the inverter can decouple from the grid, and load shedding can happen without necessitating curtailment of the solar generator or storage unit the inverter is attached to.

Along with gaining technical skills, Umar says his experience in the U.S. fostered personal growth, partly through the interaction with other professional researchers and partly through exposure to people of different backgrounds.

“ASU is a very diverse university. I went to an event, International Student Night, and there were people from 42 different countries. I have friends from India, the USA, China and Japan.”

“The U.S. is the place where you have people from every country and every religion,” she says. “That was a very good experience: seeing people with different cultures, behaviors, manners, religions and foods.”

Like Umar, Qamar also values the experience she gained working in a world-class laboratory.

“The big thing for me is the experience I got at the Photovoltaic Reliability Lab at ASU,” she says.

The center focuses on predicting the lifetime of solar photovoltaic (PV) modules for various climatic conditions by applying statistical tools. Qamar worked under the guidance of Dr. Govindasamy Tamizhmani (Dr. Mani), a PV research veteran at ASU with some 32 years of experience and more than 150 published papers.

One of Qamar’s research projects during her USPCAS-E studies involved creating a mathematical model that tracks the health of a PV system.

“You can see how your system behaved, how much energy you produced and compare that to how much energy you should produce,” Qamar says. “The analysis gives you insights to help you install systems in different areas in Pakistan so that they can deliver maximum performance.”

Qamar’s other USPCAS-E project involved working on a micro-hydro system capable of generating electricity using the flow of small streams.

“The purpose was to electrify remote communities, especially in rural areas,” she says.

Through her USPCAS-E research projects, Qamar was able to contribute to two professional papers, a good start to the publishing life that is central to an academic career.

Working Today and Working
Toward Tomorrow

Qamar is headed to graduate school again, hoping to be admitted to a university in Canada so she can explore another country. For now, she’s teaching classes at two private universities in Pakistan. Once she completes her doctorate, she hopes to continue teaching in her native country and also consult within the energy industry there.

Umar is teaching as well, plus he’s conducting research, including the solar inverter project noted before as well as the development of an AC motor testbed that is based on international standards to evaluate the efficiency of large industrial motors. The goal is to identify non-compliant and inefficient motors in the national grid.

Like Qamar, Umar is also headed back to North America, and he’s awaiting word on admission to a doctorate program. He’ll be attending a U.S. school on a Fulbright Scholarship, one of the most competitive and prestigious fellowship programs in the world. According to Umar, his USPCAS-E experience helped him earn that scholastic honor.

After he earns his doctorate, Umar dreams of enriching his hometown university, which he says now suffers from a lack of doctorate-level teaching fellows.

“I want to bring contracts, funding and good people,” he says.

He also wants to encourage entrepreneurship locally in the energy sector.

The similar path these two scholars have chosen to take reflects the life-changing knowledge they acquired through their USPCAS-E studies.

“It gives me my vision,” Qamar says. “Now I am very clear on what I should do and what I will do. That is because of USPCAS-E.”