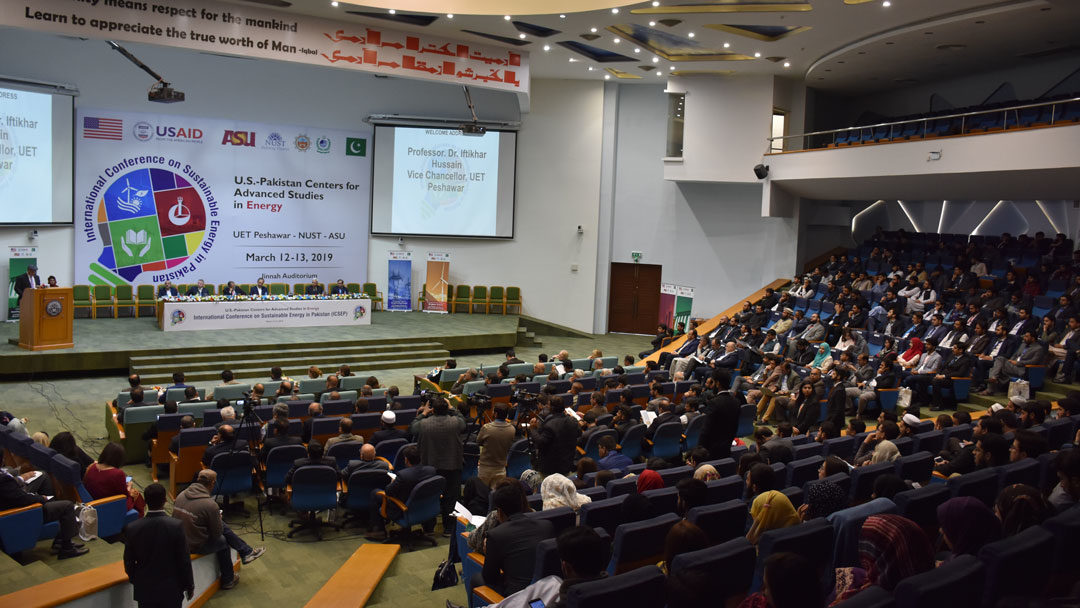 “You’re not going to solve Pakistan’s energy crisis from Britain or the U.S. or any other place in the world,” said Arizona State University professor Dr. Clark Miller in a Pakistani television interview in 2016. “You’re going to have to own it and solve it here.”

Three years later, and on the heels of the first-ever International Conference on Sustainable Energy in Pakistan (ICSEP), it’s evident that Pakistani faculty, students and government representatives are doing just that.

The conference, held March 12 and 13 at the National University of Sciences and Technology (NUST) in Islamabad, was organized and hosted by the U.S.-Pakistan Centers for Advanced Studies in Energy (USPCAS-E) project’s three partners: Arizona State University (ASU), the University of Engineering and Technology (UET) Peshawar, and NUST. The conference was a seminal event featuring 11 international speakers and more than 550 participants, 120 of whom were Pakistani women pursuing technical careers in the energy sector. 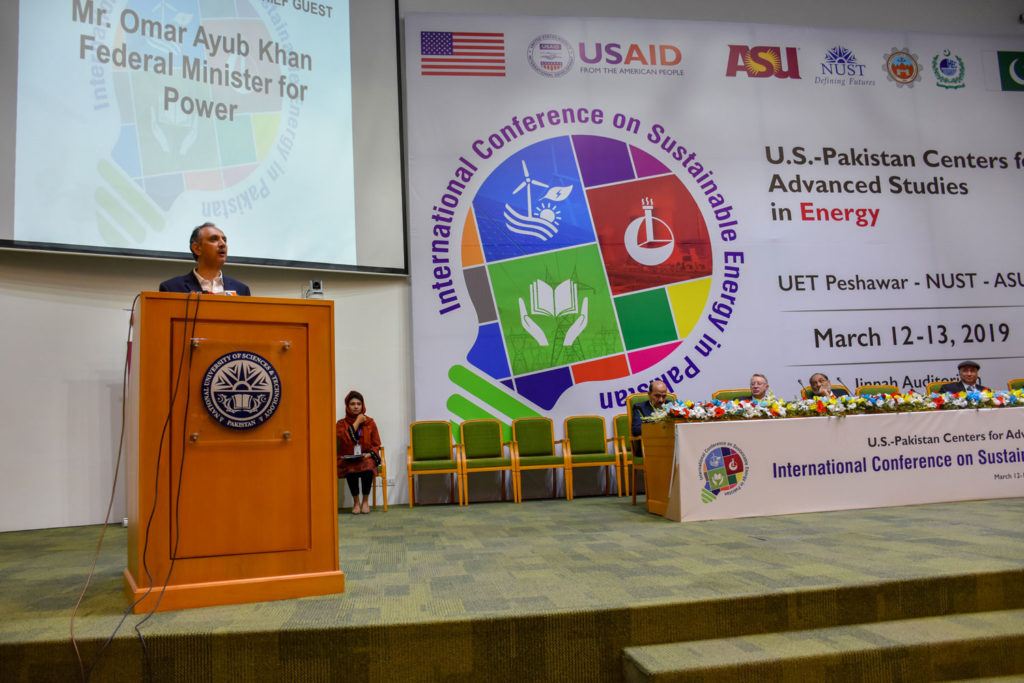 “I see this conference as a valuable addition to Pakistan’s now flourishing energy sector, and specialized research centers like USPCAS-E surely will play an instrumental part in providing sustainable and renewable energy solutions for Pakistan’s energy challenges,” said Mr. Omar Ayub Khan, Federal Minister for Power Division, in his address as the conference’s chief guest.

Sustainable research centers, which produce sustainable energy solutions for Pakistan, are critical. And that’s why this international conference was so monumental. It’s a critical step in ensuring the long-term sustainability of the two USPCAS-E research centers in Pakistan, which were created as part of a collaborative five-year project with an $18 million investment from the United States Agency for International Development (USAID). The project is now in its fifth and final year of USAID funding. 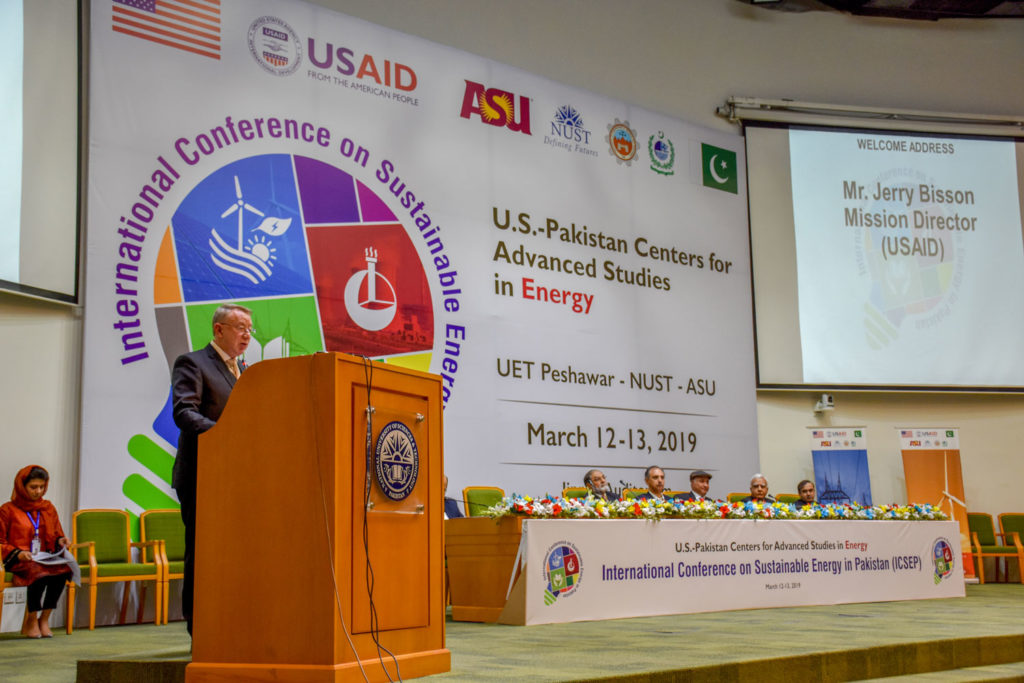 Mr. Jerry Bisson, USAID Mission Director, said: “One of the most important investments we can make moving forward is in the institutions that foster innovation and the great minds that convene within them.”

USPCAS-E was established with a driving mission to cultivate and grow indigenous talent in Pakistan specially trained to tackle the country’s mounting energy challenges. The project’s main goals are to focus on applied research relevant to Pakistan’s energy needs and help produce skilled graduates in the energy field.

Since the project’s inception in 2014, USPCAS-E has, among other accomplishments:

USPCAS-E leadership and faculty decided to build on these accomplishments by hosting ICSEP, which fit perfectly into the overarching goals of the project in many ways.

“ICSEP provided a forum to highlight and disseminate the centers’ achievements in applied research to the industry, academia, government and civil society,” said ASU USPCAS-E Deputy Director Ahmad Saeed, who is based at NUST.

“Our stakeholders were able to get a better understanding of the high caliber of the faculty and graduates of the two centers. The conference also provided an opportunity to the faculty and students to network and learn from the experiences of the prominent international and national energy experts who attended.”

Conference speakers were selected for their cutting-edge research and application in key areas including: 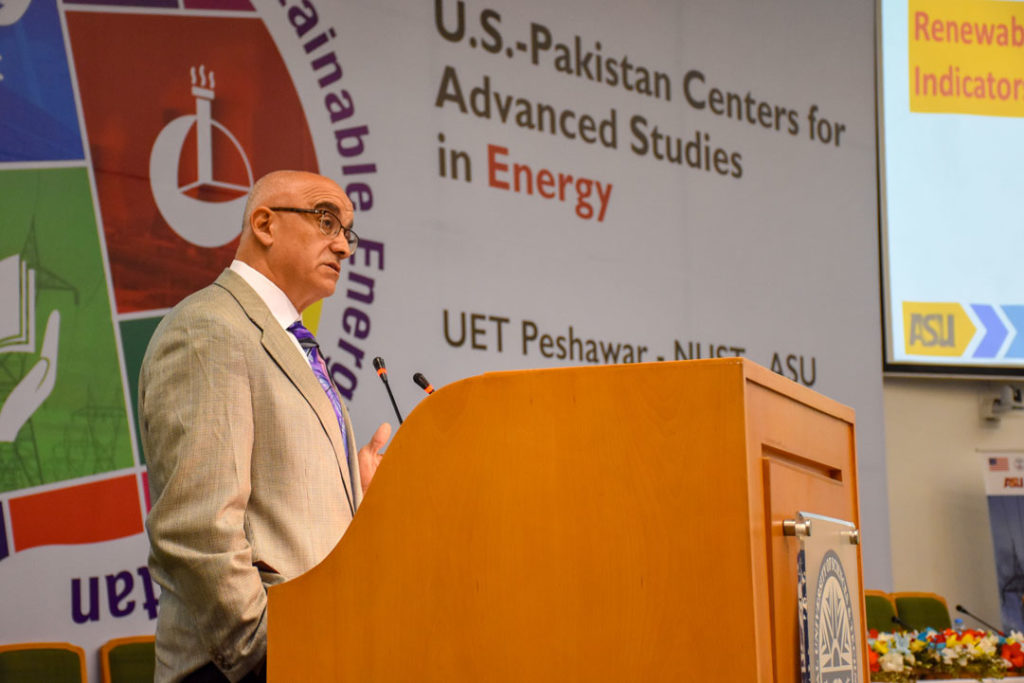 Energy policy and management. Highlights in this area included a presentation by USPCAS-E Director and ASU professor Dr. Sayfe Kiaei, on future trends in energy. Another notable speaker was Dr. Adil Najam from Boston University, who presented the idea of distributed generation in a whole new manner and highlighted how a challenge can be converted to an opportunity.

Renewable energy. Dr. Jawwad Darr of University College London-UK gave a keynote on new approaches and capabilities for energy storage materials, as well as an update on the UK Faraday challenge for energy storage. Another keynote was given by Dr. Kamaruzzaman Sopian of Universiti Kebangsaan in Malaysia, who focused on advances in photovoltaic thermal solar collectors.

Thermal energy engineering. Technologies, barriers and research in the area of advanced biofuels via biomass gasification were discussed by keynote speaker Dr. Edd A. Blekkan, a professor at Norwegian University of Science and Technology (NTNU) in Norway.

In addition to the plenary talks, technical sessions and panel discussions that happened throughout the two-day conference, faculty and students at USPCAS-E were able to showcase and discuss their work with visiting experts and local stakeholders. A total of 42 Pakistani students — 21 from UET-P and 21 from NUST — presented research posters. 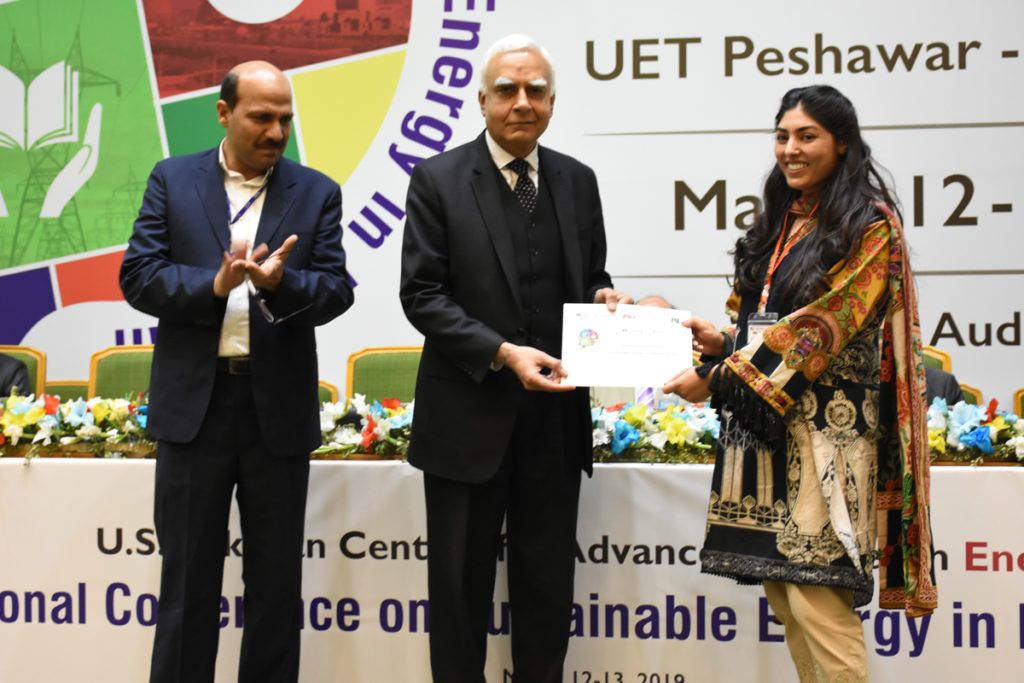 “In the poster session, the students had an opportunity for local industry and fellow researchers to critically assess the work they presented on their posters,” said Dr. Tanvir Ahmad, a UET-P professor and conference organizer. “Some of my students are already invited for meetings by industry professionals to get more information about their ongoing projects.”

The beginnings of cross-sector collaboration

From an economic perspective for Pakistan as a whole, the international conference marks the beginning of a new chapter between universities, industry and international partners to work together to address energy challenges.

“It demonstrated the importance of the USPCAS-E centers and the fruition of students graduating with advanced degrees to help lead the effort,” said Dr. Sayfe Kiaei. “This project has brought a significant number of local energy experts to Pakistan’s economy.”

There are global ramifications, as well. Conference organizer Ahmad Saeed said: “Overall, ICSEP helped in putting USPCAS-E on the energy map of not only Pakistan but the world. It emerged as a credible energy research institute undertaking cutting-edge applied research in energy.”

That’s a fantastic outcome, especially given the challenges that USPCAS-E faculty had to overcome in planning the conference. Chief among them were safety concerns that invitees had with traveling to Pakistan.

“At the moment, due to security challenges, Pakistan is not a favorite travel destination,” said Saeed. “We had some speakers cancel due to concerns, but past experience with international conferences shows that the scientific community embraces greater courage to stand by their comrades in difficult times, and ICSEP was no different. The majority of our invitees chose to visit Pakistan, and I think the conference showed a softer side of the country.”

“It helped bring people closer and address biases and any misunderstandings which may have existed for any reason. I would call the conference a resounding success.”