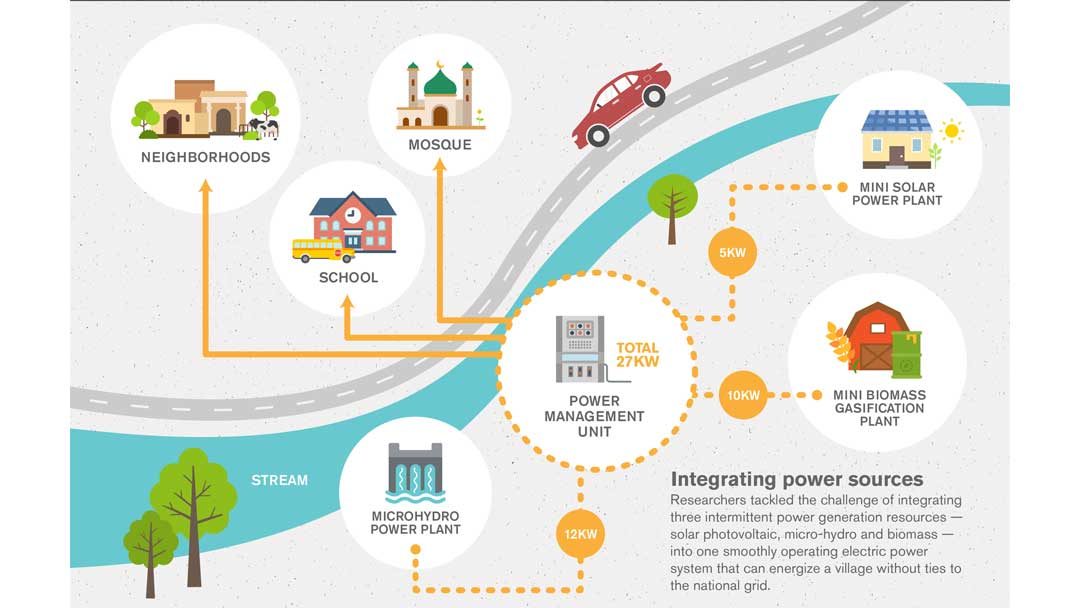 Pakistan has plenty of hydro-power resources: more than 300 potential sites could be used to electrify remote villages in the northern part of the country. There’s plenty of sunshine, too. As many as 40,000 remote villages could use solar power for electricity generation, according to expert estimates.

Likewise, the nation has plenty of trees and agricultural by-products to fuel biomass generation. It’s the fifth largest sugarcane producer worldwide, and sugarcane has the highest energy-to-volume ratio among energy crops, says the International Sugar Organization.

After extracting sugar from the plant’s stalk, what’s left is bagasse, a ton of which has an energy content similar to one barrel of crude oil.

“More than 16 million tons of bagasse is available annually in Pakistan, and there is a potential to produce up to 1000 MW of electricity from bagasse industry,” wrote researchers Muhammad Shoaib Khalid and Abdul Basit in a report to the U.S. Agency for International Development.

Here’s the problem with all that potential: Two of the three resources — solar and micro-hydro — have intermittency built in because the sun doesn’t always shine, and water doesn’t always flow consistently. That’s why Khalid and Basit – both professors at The University of Engineering and Technology, Peshawar (UET-P), are primary investigators on an applied research project being conducted by the U.S.-Pakistan Centers for Advanced Studies in Energy (USPCASE). 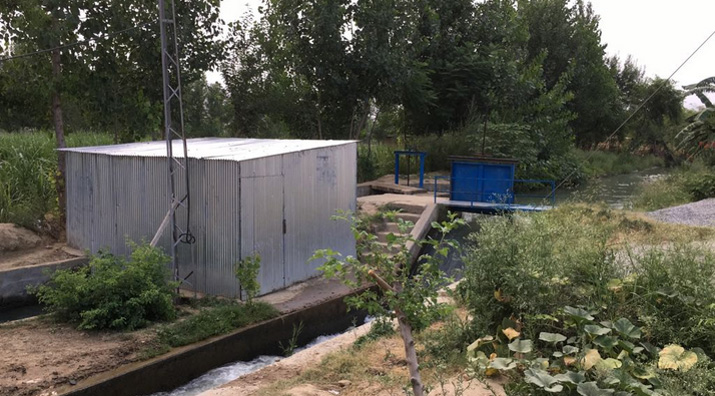 Taking it to the streets

According to a 2018 renewables readiness assessment report from the International Renewable Energy Agency (IRENA), half of Pakistan’s rural population still lacks electricity, relying instead on candles, kerosene and wood to fulfill daily energy needs. Some urban residents endure load shedding or rolling blackouts that occur when power providers lack capacity and must de-energize parts of their system. Many others are beyond the national grid. No power lines come their way.

Such power shortages “negatively affect social-, economic- and health-related development goals” of these communities, explains Govindasamy Tamizhmani, a research professor of engineering in the Photovoltaic Reliability Laboratory at Arizona State University’s Ira A. Fulton Schools of Engineering. “This applied research project was focused on designing and prototyping a community-level microgrid that could work with different generation types.”

Control and synchronization of that generation were the big challenges the research team faced.

It’s far simpler to use one generation resource and, if it’s intermittent like solar, add battery energy storage to keep lights on at night. But, storage is cost-prohibitive for most Pakistani villages, Basit says. It also won’t work with micro-hydro facilities, which have generation that fluctuates on a seasonal basis.

But, northern Pakistan has several resources to tap, and tying them together is as effective as storage.

When the sun goes down, hydro can pick up the slack, explains Ahmed Sohail Khan, ASU’s technical advisor for USPCASE project at UET-P.

At the same time, the microgrid had to ensure that the fluctuating energy generation could be regulated in-sync with the changing energy demand — also known as the load side — of the community.

“Multiple types of intermittent power synchronized together and delivering a smooth 50 hertz. It’s not an easy task,” Khan says.

“We have loads fluctuating from 15 to 27 kilowatts all of the time,” Basit explains.

Now the team uses two approaches to balancing electricity supply and demand, an absolute requirement for safe, reliable power flow. First, they developed an electronic load controller associated with the hydro generation. Khan says it has a “a dumping load,” activated on surplus energy from the system, that can be turned on and off as needed when the community load fluctuates. [Continued on page 4]

This action keeps system frequency at a steady 50 hertz, which is the standard in Pakistan and the frequency of household appliances use. The dumping or ballast load, however, doesn’t go to waste. It heats water for use the following day, Khan explains.

After stabilizing the micro-hydro generation, the team integrates the solar and, ultimately, the biomass generation as well.

A programmable logic controller or PLC — a type of industrial computer — monitors the voltage, frequency and other power-quality parameters of the solar and biomass generation. If both of these generation facilities have matching parameters, the PLC allows power to be integrated. If there are power quality mismatches, it sends signals to correct them.  And, when load exceeds generation, algorithms within the PLC determine which load gets priority: industry, school, mosque or households.

This testbed was a part of the applied research component of the USPCASE program. Through it, researchers from the National University of Sciences and Technology (NUST) and UET-P team up with U.S.-based colleagues at ASU and OSU to pool time and talents. These collaborations ensure that stateside researchers have in-country expertise to support and guide activity while Pakistani researchers can tap the resources of academic facilities with more mature research environments. That, in turn, fine-tunes skills and helps the Pakistani scholars more effectively vie for research funding.

The applied research arm of these collaborations takes aim at creating solutions that can be quickly and affordably address Pakistan’s electricity shortfall.

“The overarching goal for this project was to design, prototype and field-test the microgrid concept in a real-world remote community,” says Tamizhmani. This was done, he says, “with the expectations that the successful completion of the project will result in a nationwide roll-out of the concept to many other remote communities.”

In fact, this project is a ground-breaker in Pakistan.

“It’s the only hybrid microgrid in the northern area,” says Basit.

Not only does the microgrid combine multiple renewable energy resources into one stable, reliable power system, it also leveraged local construction to create an affordable, efficient power system.

On the efficiency side, the biomass facility weighs in. It uses a gasification process to transform leaves, wood and crop waste into syngas, a synthetic gas made up mostly of hydrogen and carbon monoxide.

“The syngas directly burns in the generator,” says Khan. It’s a low-polluting fuel, “a much cleaner process, he adds. “It produces power and, in the winter, it can heat homes in the village.” Even the waste product from the facility is useful. It can be used by local farmers as fertilizer.

On the affordability end of things, this microgrid leverages local production and in-country manufacturing to keep costs down — way down.

“Instead of importing commercial biomass gasifiers from abroad, our project team partnered with a local manufacturing company to design and produce the unit in Pakistan,” says Tamizhmani. “This approach has not only provided significant savings — we estimate up to 50 percent — but it will also support the local and national economy.”

“For the entire microgrid project including all three components, the team managed to cover the costs within budget, amounting $40,000 in total,” says Basit. “This is a testbed, and a testbed costs more. If you want to replicate it, you might be able to reduce costs even more.”

Meanwhile, this bargain delivers multiple societal benefits. Because it uses biomass, a microgrid like this diverts agricultural waste from landfills and eliminates problematic slash. It also has the ability to aid in the elimination of energy shortages throughout rural areas, support local industry, add to the economy and, once grid-connected, it may help the national grid manage transmission and distribution system constraints.

What’s more, the microgrid concept can help USPCASE facilities in Peshawar stay strong by providing a source of income and funding.

“There is no such solution available in the local market with such level of accuracy, intelligence, and reliability,” Khalid and Basit note in their report to USAID. “This solution has a high level of commercialization potential, and is in high demand for replication in remote areas by the local government.”

Real-world experiences in a real-world testbed

USPCASE is preparing graduate students to meet the demand for energy engineers in Pakistan, so it’s fitting that students were an integral part of the project. They contributed to several aspects of research, including:

“The respective principal investigators from all three universities have heavily involved their students during the planning, design and implementation of this project,” Tamizhmani says.

Ahead, the researchers and their student assistants will analyze field data from the pilot microgrid and refine the concept to make it ready for deployment throughout Pakistan.