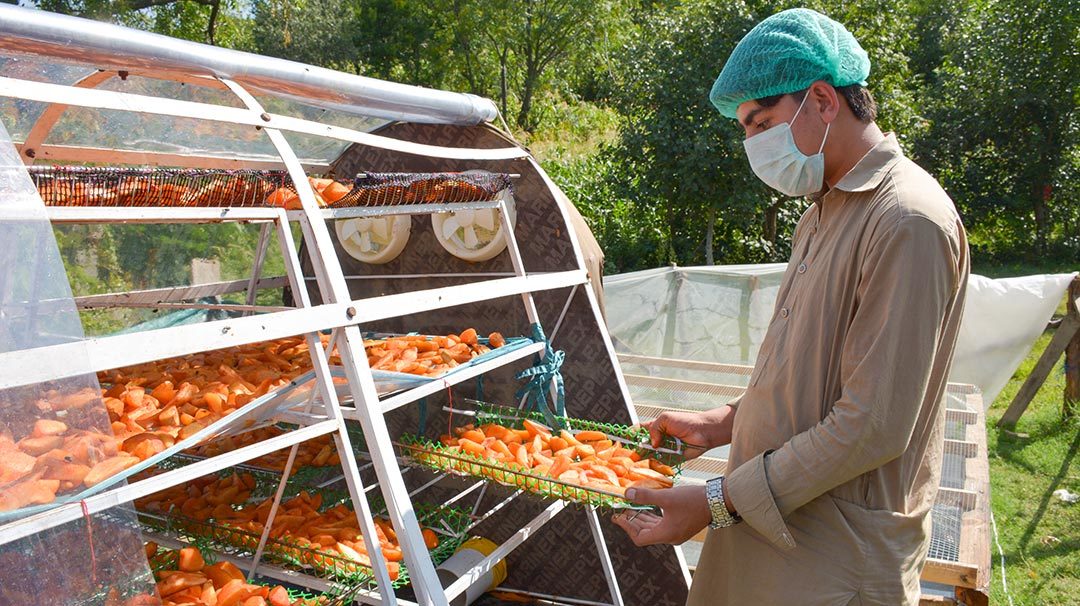 Agriculture is often considered the backbone of Pakistan’s economy. With technological advancements, farmers are switching from traditional farming techniques to innovative methods that increase production and maximize sales. Farmers in the Swat region of Khyber Pakhtunkhwa are using new technologies to dry fruit. Although fruit dehydration involves more processing time, it has many benefits: shelf life is increased, storage space is reduced, and transportation is easier. These factors also increase the number of available markets and the selling price.

Increasing farmer revenue was the motivation for Dr. Suhail Zaki’s goal of bringing solar technology to the fruit drying process in his applied research project, “Development of a Large Capacity Solar-Biomass Hybrid Tunnel Dryer in Swat for Long Term Preservation of Fruit Including Persimmon.” Zaki is a professor of renewable energy at the U.S.-Pakistan Center for Advanced Studies in Energy at the University of Engineering and Technology Peshawar.

“If fruit drying is managed efficiently, we can earn good revenue not only in the local industry but also in the form of foreign exchange by exporting these items and thus positively impacting Pakistan’s farming community,” says Zaki.

This applied research project focused on the design, development, testing and commercialization of solar dryers to process persimmons and other fruits in the Swat valley. Solar-biomass hybrid tunnel dryers utilize the energy of the sun and wind to dry agricultural products, preparing them for storage and processing. The fruit is spread evenly on drying racks inside the tunnel. The air below the semi-transparent collector is heated by the sun and spreads throughout the tunnel. The increased temperature decreases the relative humidity of the air, thereby allowing the air to dry the fruits efficiently. Also, the product is completely protected from external environmental impacts such as rain, insects, and animals.

The locally trained craftsmen can build the entire structure and transport to village areas for installation, primarily on rooftops or open fields.

Dr. Zaki adds: “A properly designed solar tunnel dryer works without any major oversight and requires only a small amount of maintenance that can generally be conducted by the end-user.”

Though many types of solar dehydrators have been developed in Pakistan, the tunnel type is typically designed for large-scale applications. It is considered to be the most cost-effective design, but it has not been tested in smaller applications, particularly in the solar-biomass hybrid mode.

After receiving the award, the researchers worked with Mr. Amjad, Coordinator Economic Growth, Sarhad Rural Support Program (SRSP), who, in turn, facilitated a meeting with the Baghban Welfare Organization in Swat valley.

“We planned to set up a single large tunnel dryer at a central location for the surrounding communities. However, after the meeting, we realized that because the target population is spread across a large region, one large dryer would not serve the desired purpose. Instead, we realized that several smaller-scale dryers would be much more suitable,” recalls Dr. Zaki.

It was mutually agreed that 50-kilogram (about 110 pounds) capacity dryers would be ideal to ensure the effective integration of the technology with the highest economic and social return.

“Our region has established 26 Business Interest Groups (BIGs), having one focal person each, and around 18-25 members. There are separate BIGs for male and female members,” explains Sahibzada, a resident of Swat and headmaster at a local primary school. BIGs are located throughout Swat valley. The organization has been structured and beneficiaries trained by SRSP, for the economic growth of the residents. Based on the feedback from the BIGs, the USPCAS-E research team identified five locations to deploy the dryers: Chikrai, Bagh Deri, Tango Jare, Charbagh, and Chuprial.

The prototype dryer was designed and developed at USPCAS-E UET Peshawar. It has 4ft x 16ft x 5.25ft steel structure semi-cylindrical tunnels weighing nearly 70 kilograms and can dry 70 kilograms of fruit at a time. It was covered with transparent polycarbonate sheets and having several layers of wire mesh racks/shelves for the placement of whole uncut fruit or chemically treated slices of fruit for drying.

Asif Ali, a USPCAS-E research student, says, “I worked on the design and experimentation of this system. I studied the existing designs being implemented globally and proposed my design based on the local context. The uniqueness of this system is that we have a solar dryer with a biomass backup that enables 24/7 operation. This continuous operation helps the local producers for quick turnaround time while ensuring high product quality.” 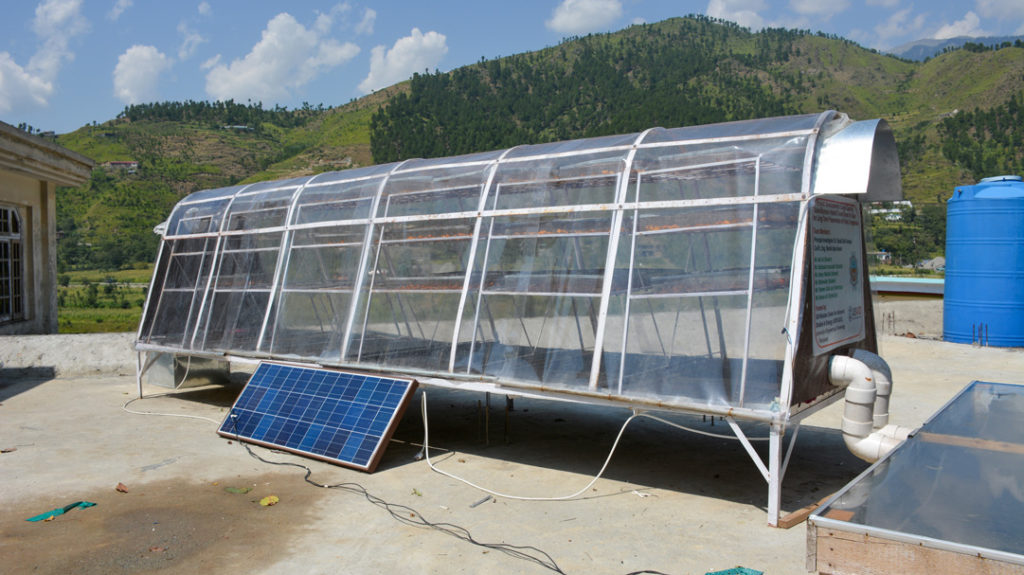 From Prototype to Field

After the successful testing of the modified prototype hybrid dryer, six dryers were manufactured for deployment in selected locations of Swat valley. Some of the post-prototype design modifications included placement of the entire tunnel dryer onto an 18-inch-high angle iron frame to allow the free movement of hot air from the biomass burner into the heat exchanger, and design changes inside the heat exchanger to improve airflow. The frame decreased the temperature gradient in the initial portions of the heat exchanger, allowing for more uniform heating of the entire tunnel area. The additional collector area, which was previously placed in a horizontal position, was now tilted by an angle of two degrees to allow for the smooth flow of rainwater, to prevent the leakage of water inside the collector that might damage the absorber surface. Also, the tunnel was given the shape of a parabola, rather than a semi-circle, to enhance its efficiency.

The entire system consists of four major components – the tunnel, the biomass burner, the collector, and the electrical system. It is an electromechanical device that operates only on solar radiation and biomass as sources of energy. It is a hybrid system that integrates three renewable energy sources – solar PV, solar thermal, and biomass.

“Our tests indicated that the tunnel designed for drying 50 kilograms of agricultural products at any given time is sufficient for drying up to 75 kilograms in a single batch. We experimented with potatoes, tomatoes, mangoes, eggplants, green chilies, melons and peaches,” says Dr. Zaki.

Sahibzada Imad, another USPCAS-E scholar who was part of this project, says that he worked on the heat exchanger component.

The two sheets are separated by studs to maintain an unrestricted flow of hot air. The asbestos sheet provides insulation at the bottom to prevent heat wastage, while the top zinc sheet acts as the heat exchanger to heat the air in the tunnel while also serving as a collector to absorb solar radiation during the daytime.

Bringing Value to the Producers

The test results at USPCAS-E UET Peshawar and feedback from the end-users in Swat valley, as well as from SRSP representatives, have been very encouraging and demonstrate the value of the applied research. It will take about a year to document the benefits of the provided dryers and measure the utilization by the communities in Swat.

Sahibzada says, “Previously we were using the traditional system for drying fruits that requires a lot of effort and is also very time-consuming. Drying in the open environment exposes the fruit to insects and dust that affects the quality of the product.”

“The hybrid tunnel dryer has made the process easy for us, and it’s very user-friendly. Also, we can run the dryer round the clock, reducing the processing time by 50 percent!” remarks Sahibzada.

The applied research project funded through the USAID grant has indeed yielded a highly visible product that is expected to attract interest from communities all across the country. The USPCAS-E research team recommends that the government of Pakistan allocate funds and provide incentives to the private sector for producing dryers on a mass scale and supplied to farmers on a subsidized basis. 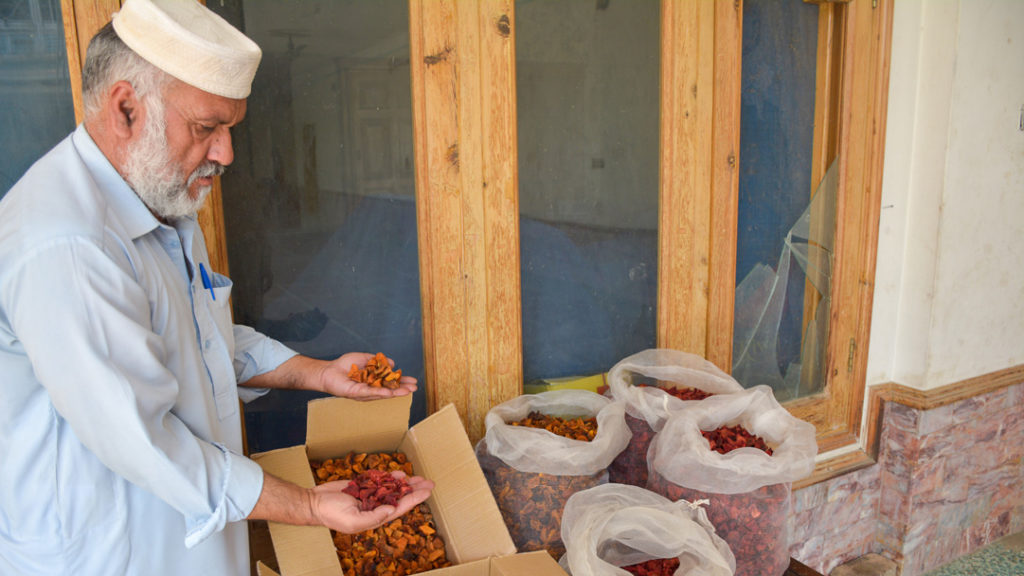